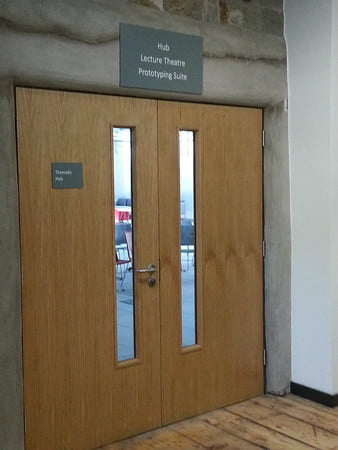 The Grade II listed Victoria Mill complex, known locally as The Weavers Triangle, has been transformed with the help of Bespoke products. The site, once at the heart of Burnley’s textile industry, encompasses many listed industrial buildings & heritage assets & is one of the finest surviving Victorian landscapes in the UK.

The first phase of this major re-development has now been completed with the opening of the North West’s first University Technical College (UTC). The college provides technical study to 800 students aged between 14-19 specialising in construction & engineering.

Bespoke were tasked to produce an array of specialist doors and doorsets to compliment the existing features of the buildings. Doorsets were manufactured in European Quarter cut Oak veneer and high pressure laminate to varying fire and acoustic performance criteria including FD30 & FD60 rated doorsets and 35db acoustic doorsets. The fast track programme meant that the doorsets were provided in just under 4 weeks form site measure to final delivery.