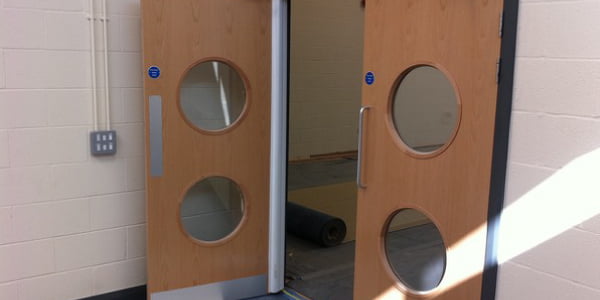 The importance of fire doors is once again made clear with this incident, which could have turned out very differently had they not been installed or had been illegally held open.

The cause of the fire, which began in a tumble dryer at Summerlands Care Home at around 11pm, is now under investigation.

Summerlands Care Home caters to several vulnerable adults, most of whom were able to evacuate the building without assistance. Several adults were rescued by the attending fire crews and two were taken to hospital for treatment due to smoke inhalation.

Jason Boh, who was in his role as Watch Manager of Southsea Fire Station when the fire occurred, said: the incident could have been a lot worse if the fire doors at either end of the corridor leading up to the laundry room had not been firmly secured. He noted that the fire doors had done their job and kept smoke and flames contained within a small area. If they had been open, he added, it could have been much more severe and we could have been looking at fatalities.

The laundry room and corridor were both badly damaged by fire and smoke though, apart from the two cases of mild smoke inhalation, no one was injured. Residents were accommodated in another nearby care home while the blaze was dealt with and fire crews departed at 1:30AM, giving the all clear for residents to be brought back to the building. Elysia Fung, the Deputy Manager at Summerlands Care Home, praised the efforts of emergency staff, saying: We are hugely appreciative of the efforts and help given to us by the fire service and the ambulance service.

Are your fire doors up to scratch? Bespoke Complete Services exist to work in close partnership with your organisation, producing custom fire doorset solutions that are designed to the ultimate standard. To find out more just give us a call. BCS – Protecting Lives with Quality Fire Doors.