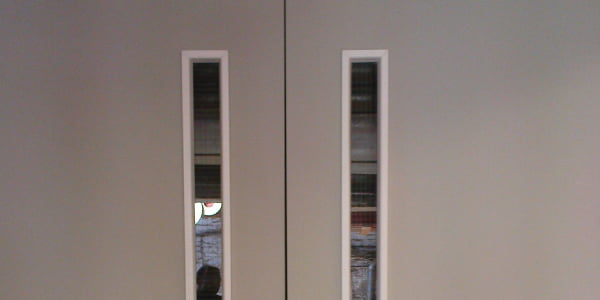 Countless lives have been saved since fire doors became a mandatory feature of public building design and workplaces. Although their name suggests they only prevent the spread of fire itself, the first function of fire doorsets in an emergency is help stop creeping, lethal smoke.

Smoke inhalation is one of the biggest threats to survival in the event of a fire; the lack of oxygen quickly causes anyone trapped within to lose consciousness, preventing them from escaping the oncoming flames. Buildings are compartmentalised with fire doors separating the sections to slow down the spread of smoke – but how is this achieved?

Intumescent strips are installed onto fire doors, sealing them once closed and preventing any spread of toxic smoke. Each seal has been carefully installed into pre-cut grooves in the fire doorsets and, in the event of fire, growing temperatures cause the seals cellular structure to expand, completely filling the gap. The door edges become less susceptible to early damage and increase potentially life-saving evacuation time.

Quality testing of such vital doors and components is of course extensive, rigorous and tightly-regulated by British Standards and Certifire. The testing includes recreating as closely as possible the conditions of a real building fire with a number of different factors, such as complete fire door assembly, a variety of frames and all fitted ironmongery, being carefully examined.

Fire doorsets are deemed to have lost their integrity once the door has burned to a point where cracks have formed that flames can pass through or where burning occurs on the unexposed door face; total failure occurs when the fire door collapses completely. The time it takes for total failure to occur forms the FD rating, which is generally set at FD 30, 60, 90 or 120 minutes.

Fire doorsets from BCS have been thoroughly tested by an approved Fire Testing Centre and fully certified for quality.

Make sure you comply with the law on Fire Doors – choose BCS for professional, lasting quality. See our work here.